Where is best salvage yard to sell my classic car?

THE BEST OF BRITISH 🇬🇧

Feast your eyes on this classic MG Midget. 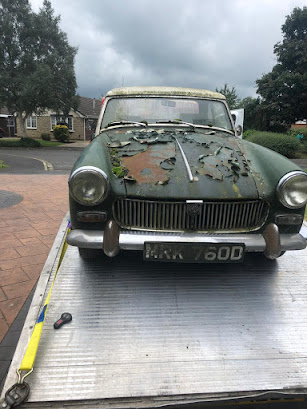 She was bought over a decade ago by Donna Woods and her husband who both have a penchant for old classic cars.
They found the 1966 beauty on popular auction site eBay and had planned to restore the racing green beauty to her former glory.
But as with so many things, life and work got in the way and the stunner ended up stationary in the driveway gradually rusting over and wasting away.
“We bought it off eBay from a chap who had been restoring it and he got arthritis in his hands and he couldn’t do it anymore and had top sell it on,” explained Donna.
“So we bought if off him with the intention of carrying on his work but unfortunately our work just took over and we never got fully round to it.”
Fortunately the couple did get to enjoy her with the roof down and the wind in their hair.
“We have been in it and had some really nice days out in it,” remembers Donna.
“We have enjoyed it but unfortunately life takes over and the car just started sitting there and time went by longer and longer and longer.
“It was just going to rack and ruin, and I actually thought someone needs to take it and restore it.”

With plans to sell their property, the Woods knew it was also time to get rid of the car which shows 13,469 miles on the clock but has possibly done a fair few more!

LIFE IN THE OLD GIRL YET!

They hope someone will take on the job they never got around to and thoroughly believe there is life in the old girl yet!
“I don’t think it’s beyond saving at all but if we had have left it much longer I think it would have wasted away,” admits Donna.
“It’s a lovely little car. I’m a very 1950s person and it’s fitting with my personality.
“And my husband likes old cars but we just haven’t had the time to do it up. It’s a shame really.”
When they did take it for a spin, Donna says she drove like a dream.  But the vehicle required a strong arm, as cars back then didn’t have power steering like they do these days.
“We are both very tall, me and my husband; he’s 6ft 2 and I’m 5ft ft 8.
“To look at it you wouldn’t think we could both get in it comfortably, but we have, it’s a nice drive.

“It’s heavy to drive because it doesn’t have power steering so it’s a heavy drive but that’s what you get with an old car and they don’t make them like they used to!”

The Woods have always been fans of classic cars.
“Before I had that we had a Ford Sierra, it was a 4×4 2.8 it was old,” she says.
“We’ve always had old cars. We’ve had a Brooklands Capri, we’ve had all sorts over the years. “And if you can learn to drive in an old car you can drive anything.

“The MG has choke in it as well – you don’t see many of those these days!”
A choke used to reduce air flow into the engine to give it a helping hand at starting.
Donna admits it was sad to see their MG go, but is happy The Scrappers will see that it goes on to be restored. It will be restored to its former glory by someone who had the time.
“It was sat on our drive in front of the garage for years,” she says.
“I think it’s sat on its alloys at the minute!

“We are looking to downsize house.  There was a scooter and the MG car and I knew nothing was going to get done with them and because we are downsizing house I’ve not got the space to keep it anymore so it’s just gotta go. If we weren’t selling the house it probably would have stayed there!