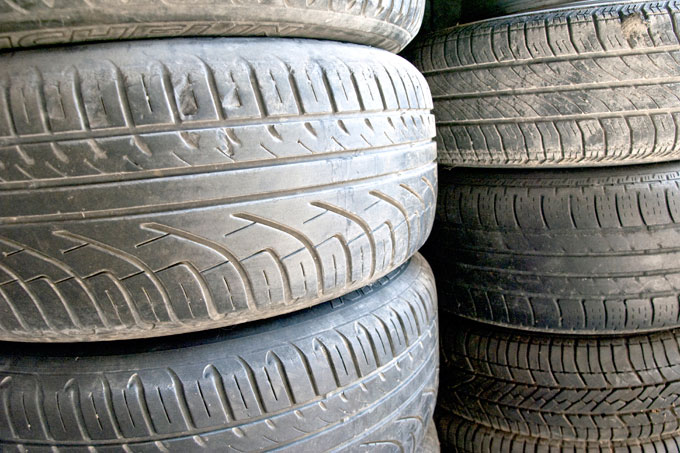 Here at The Scrappers, we believe that the whole recycling process of a car is important, and within that is the recycling of tyres. The tyres that we remove from cars, we either sell part worn tyres, if they are in a good condition or sold on if they are scrap tyres. Tyres make a significant contribution to worldwide waste and most counties and unions now have legal frameworks in which they must work towards when addressing the stockpiling of scrap tyres. Here in the UK we fall under the EU Legislation, which aims to ensure environmentally safe disposal of tyres. Where close to 55 million waste tyres are produced every year.

Tyres are often illegally dumped, and cause a significant fire hazard. If a stockpile of tyres sets slight it is near on impossible to extinguish or control and can burn for many days. This could then cause serious air pollution. The tyre disposal directive works hand in hand with other recycling directives; Landfill Directive (1999), End-Of-Life Vehicle Directive (2000) and the Waste Incineration Directive (2000).

The Landfill Directive is to ‘prevent or reduce as far as possible the negative effects on the environment, in particular the pollution of surface water, ground water, soil and air and on the global environment, including the Greenhouse effect, as well as any resulting risk to human health, for landfilling of waste during the whole life-cycle of the landfill.’

The End-of-Life Vehicle Directive ‘aims at the reduction of waste arising from the end-of-life vehicles. The scope of the directive is limited to passenger cars and light commercial vehicles. The directive covers aspects related to treatment operations.’
The Waste Incineration Directive aims to ‘minimise the impact of negative environment effects on the environment and human health resulting from emissions to air, soil, surface and ground water from the incineration and co-incineration of waste.’

We Pay For Waste Tyre Collection

We have a whole department dedicated to sell part worn tyres. We believe that as long as the tread depth of a tyre is still good, and it is in a good working condition, it can be used to get other cars back on the roads. What’s the point in spending a fortune on brand new tyres, when we have them in stock at half the price!

We will also pay reliable firms to collect our scrap tyres. We want to feel safe in the knowledge that your scrap tyres will be used for fuel or other uses and not dumped in a pile to harm the environment. We will check your credentials and pay you between 50p and £1 per tyre that you remove safely.

This customer recently wrote a review about the service he received when he came to The Scrappers for a spare wheel.

No spare wheel ? Check what’s in your car’s boot

My wife has a 3 year old Ford Fiesta – it is her pride and joy. She went shopping in Blackburn last year, parked her car at the top of the multi storey car park and came back to find the back tyre as flat as a pancake. She called the rescue company and they got there within the hour. Unfortunately the repairman could not get his truck through the entrance into the car park. When he arrived with his toolbag my wife
opened the boot, instead of a spare wheel I found this:

It was a plastic tray containg a device for inflating tyres. Unfortunately the tyre rim was damaged and

despite his best efforts the repairman could not inflate the flat tyre. I eventually sorted out the flat tyre at some cost. I later decided to buy a spare wheel for my wife’s car – not from a Ford dealer (I was quoted £ 130) but from a breaker’s yard at half the price. Funnily enough, when i removed the plastic tray from the boot – the spare wheel fitted perfectly in the recess :

If you are not sure that you have a full size spare wheel with your car – have a look in your boot now. If you have a Spacesaver wheel, or no spare wheel, then contact The Scrappers now and ask for a price for a full size wheel for your model.