With more than 374,000 hits, a video posted onto The Scrappers Facebook page of a cyclist in collision with a vehicle has created controversy.

The video was uploaded by Terry Walker, who owns The Scrappers, and now a national newspaper has carried the story and it’s led to lots of comments with people deciding on who is to blame.

The driver of the Range Rover is the daughter of Terry and while the cyclist was injured, he apparently is not pressing charges but is pursuing a claim.

The video was posted with the question: “Honest opinion who is at fault here?” 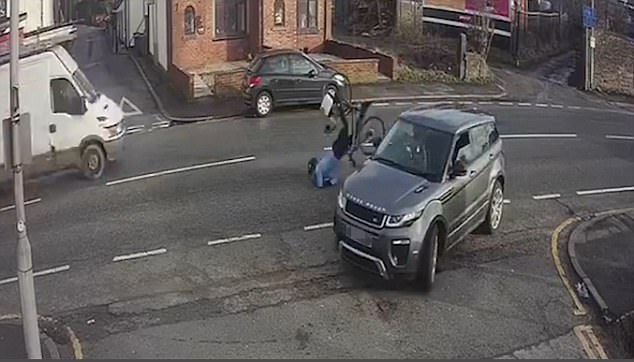 The cyclist hits the rear of the Range Rover.

The resulting online furore has led to divided opinion over whether the cyclist has the right of way.

Comments on The Scrappers Facebook video the following day approached 5,000 with commentators blaming the cyclist while others say the driver is at fault.

There’s no doubt that the cyclist takes a nasty tumble after the collision and remains in the road for a short time. Apparently, the cyclist hurt his hand and lost some teeth.

The Range Rover driver checks on the cyclist who manages to pull himself to his feet and two other cyclists also help. The police and an ambulance were called afterwards.

Watch the full video of the accident:

Rules and regulations governing how cyclists use our roads

There are rules and regulations governing how cyclists use our roads and they are contained in the Highway Code.

The government website has a link to the relevant sections with rule 67 highlighting that cyclists should “look well ahead for obstructions in the road” so they don’t have to suddenly swerve to avoid them. Cyclists must also take care when overtaking.

If you have any thought about the video, then make them known on the comments section.

Cycling UK offers a detailed look at what is, and what isn’t, allowed on the roads by cyclists.