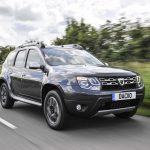 Barely 10 years ago and there weren’t many SUVs on the UK’s roads but now they account for nearly one in three of all vehicles.

And there are more new models entering the marketplace this year as car manufacturers look to tap into this growing demand.

Now data experts at HPI say that the SUV segment has been the fastest-growing for several years.

One analyst, Mark Ballmer, says that in 30 years of working the car industry, he’s never seen growth like it.

‘SUV sales growth is nothing short of staggering’