Why cars from the 1990s are on the brink of extinction 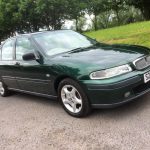 For many people of a certain age, they are the cars we grew up with in the 1990s but they are now, according to researchers, on the brink of extinction.

The findings from Honest John Classics reveals that many of the popular cars from that decade are about to follow retail giants like Woolworths into oblivion.

The cars are now dying out and in the last 12 months, researchers say, around 28,000 modern classic cars have been scrapped.

This means that the popular Rover 400, Vauxhall Cavalier and the Citroen Saxo are all dying out.

Now, the website is predicting that this rate of extinction will increase during 2018 as the popular car scrappage schemes continue.

The top 10 bestsellers of 25 years ago

They even say that from the top 10 bestsellers of 25 years ago, the survival rate of those cars is less than 1%.

In one example, researchers say that in 2016,

Auto thefts decline because of technology, but statistics conflict

The most theft-prone vehicle in America might be the Dodge Charger. Or it might be the Ford F-250 pickup truck.

Those are the contradictory conclusions of the National Highway Traffic Safety Administration and the insurance industry-funded Highway Loss Data Institute.

Still, the government agency and private group agree that the theft of late-model vehicles is on a rapid decline in the United States. One reason: automakers’ increasing use of ignition immobilizers, which stop thieves from hot-wiring cars. Nearly 90 percent of 2012 models are equipped with them.

In a report released on Monday, NHTSA said the car stolen most often during the 2011 calendar year was the Charger, with 4.8 thefts for every 1,000 cars produced in 2011. It was followed by the Mitsubishi Galant, Hyundai Accent, Chevrolet Impala and Chevrolet HHR among vehicles with more than 5,000 units produced that year.