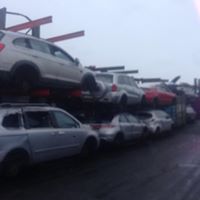 How many cars and vans are scrapped in the UK?

Just some of the nearly 2 million scrapped vehicles the UK scraps every year.

In the UK, we scrap nearly two million cars and vans every year but the current popularity of car scrappage schemes from manufacturers will probably see numbers increase.

One news agency asked the 26 manufacturers running schemes how many cars they had scrapped in the last 12 months.

The answer from 12 of them is 14,240 with the other 14 manufacturers refusing to say how many they had accepted from customers wanting a new vehicle when scrapping their car.

Another reason why Ford’s scheme is proving popular is that it is offering up to £2,000 off a new car which can be used in conjunction with any other of the Blue Oval’s current offers.

This makes it a rare example which helps explain why its sales have done particularly well.

The scrapping, or disposing of a car, is tightly controlled

It’s also important to appreciate that the scrapping, or disposing of a car, is tightly controlled.

It’s important that anyone looking to scrap a car or van uses an Authorised Treatment Facility (ATF), such as that provided by The Scrappers, because the rules on end of life vehicle treatment means the scrapper must reused or recycle as much of the vehicle as possible.

However, around one in three cars in the UK are currently being scrapped illegally.

This also causes issues for environmental hazards because unauthorised scrapyards will need to remove the harmful fluids, such as the antifreeze and oil, from the vehicle and ensure the recycling takes place efficiently.

Under the ‘end of life’ vehicle regulations means that the scrap industry has undergone huge change.

Every scrapped car and van has to be efficiently depolluted

That’s because every scrapped car and van has to be efficiently depolluted and all of its waste materials must be accounted for. Unauthorised and illegal vehicle scrappers will not be doing this.

It also explains why, in February last year, Transport for London floated the idea of a national vehicle scrappage fund.

The idea was to pay someone with an old polluting van or minibus around £3,500 to scrap it. Their figures also point to 130,000 polluting cars that need to be removed from our roads.

While the current car scrappage schemes are proving to be popular, the government has unveiled ambitious targets to remove all petrol and diesel vehicles from our roads by 2040.

Whether this happens or not remains to be seen but there is an incentive now for people to upgrade their vehicles and then switch to hybrid or all electric at some point in the future.

This means that the numbers of cars being scrapped will, inevitably increase, so it will pay to work with the friendly team at The Scrappers to ensure you get the best possible price for your scrapped car or van and be reassured that it will be dealt with appropriately.