What are the stranger things found in scrap cars?

WHAT'S ALL THE BUZZ ABOUT.
Scrapyard Finds

Over the years Bolton breakers yard, The Scrappers – its name made famous in BBC1’s reality show – discovered weird and downright wacky things left in vehicles that folk were getting shut of.

“We found quite a lot of sex toys,” revealed boss Terry Walker.

“Vibrators, furry handcuffs and the like – and we recycled everything,” he laughed.

“We’ve found knives, guns – never a real one though, only a replica – and pellet guns. One looked real but wasn’t.”

The yard itself, based in Bolton’s Waterloo Street, has been a hotbed of action – and that’s been only too real!

“We’ve had criminals running through the yard being chased by police,” recalls Terry.

“And a few years ago I had a scrapyard in Bury. Suddenly a gang

When you need to scrap vans in Bolton – call the experts! 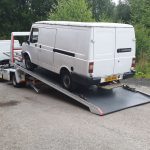 Whether you have one vehicle or several in a fleet and you need to scrap vans in Bolton or anywhere in the UK, then you need to access the best price offers quickly and easily.

With 30 years of experience, The Scrappers will offer the most money and can arrange for a free van collection too.

It’s important to appreciate that you should only deal with Authorised Treatment Facilities (ATFs) because these are fully licensed by the Environment Agency.

It’s also important to understand that you cannot be paid in cash and you must be paid directly into a bank account instead.

So, if you’re looking to offload a van or a fleet of vans to earn money to invest in new vehicles, The Scrappers should be your first port of call.

Scrapping vans that have accident damage

The Scrappers are interested in scrapping vans that have accident damage or are an MOT failure.

How to earn cash for car parts near me in Bolton

Want to scrap a car for cash? You need The Scrappers

If you want to scrap your car using the search term, ‘Cash for car parts near me’, then you will earn the best prices from The Scrappers.

With a friendly team, this family-run business is the go-to scrap yard in Bolton and has built up a thriving trade.

In addition, the popular car breakers will scrap cars and vans from around the UK and will use a network of agents to do this on their behalf.

So, regardless of the condition of your scrap vehicle, when you need to earn cash for its spare parts, then The Scrappers can help.

Not only will the scrap yard pay the most, but they will also organise a free collection of the vehicle.

How to sell your scrap car

If you need information on selling your scrap car to The Scrappers, then you can simply call the team on (01204) 388488.

How do I scrap my car?

Our main tyre guru Coxy has been hard at it, making way for a new amazing tyre shop called All Tyred Up!

The wheels are in motion, as it were!

The Scrappers have been providing quality part worn tyres for years, with thousands of happy customers.

Brand new tyres can be an expensive affair, whereas quality part worn tyres in Bolton and nationwide can be a lot cheaper yet you’re still getting incredible value and excellence.

We are also experts in checking wheel balance, tyre pressure and whether the current tyres you have are safe or not.

So if you have any questions, doubts or concerns in the tyre arena, please don’t hesitate to contact us.

We’re not just about the rubber aspect too, we also have hundreds and hundred of alloys as

Read More ...
buy engines, how do I scrap my car, replacement gearboxes, scrap car in Kent

Why you need to use The Scrappers in Bolton

There are lots of reasons why you should use The Scrappers and it’s not just about earning the best scrap car prices.

While based in Bolton, in the North West of England, the family-run firm can buy and collect scrap cars and vans wherever you live in the UK.

They will also still offer the best scrap vehicle prices and as a leading car and van breakers yard, they have established a network of agents to work with them.

This means that wherever you live, you can access great scrap car prices and arrange for a free collection at a time and place to suit you.

This could be ideal, for example, if your car has failed its MOT and needs picking up from the garage.

The Scrappers are also a leading late-model breakers yard

In addition to scrapping cars and vans, The Scrappers are also a leading late-model breakers yard and have an extensive

Earn money from a scrap car in Bolton

Get the best price when you scrap a car or van

If you are thinking of the best ways to earn money from a scrap car in Bolton – or anywhere else in the UK – then The Scrappers can help.

That’s because the family-run firm has 30 years of experience in helping their customers scrap a car for the most money.

And they can help you too!

However, there are some issues that need to be considered for anyone wanting to scrap a car for the best price.

Use a reputable car scrap yard

Firstly, you need to use a reputable car scrap yard – preferably one that is an Authorised Treatment Facility (ATF).

That’s because these vehicle breakers yards are:

MEET Robert Lee, he’s dubbed the ‘Cat Man’ because what he doesn’t know about catalytic converters isn’t worth knowing.

In fact, Robert openly admits he dreams about them on a regular basis.

“Not out of choice but they do pop up regularly,” he told The Scrappers.

“Or I can be enjoying Sunday lunch and a glass of red wine and suddenly a part number will flash through my brain.

“It’s from a long time handling that sort of material. Day by day, week by week, month by month, year by year!

“So it does become the norm that a large part of the brain is consumed with that info,” he laughs.

You might think the subject of catalytic convertors wouldn’t float everybody’s boat, but scratch beneath the surface and you begin to understand Robert’s passion.

Most people might know a catalytic converter’s function – to reduce fuel emissions.

But did you know that

What can I do with my old van?

CUP A LOAD OF THIS..
https://thescrappersltd.blogspot.com/2020/06/sell-my-van.html

Give these mugs a shot! Here’s your chance to have a brew with Britain’s best known scrapyard and raise money for a good cause in the process. Bolton breakers yard, The Scrappers in Waterloo Street, have launched a range of caricature mugs which they are selling to the public to raise money for Bolton Royal’s Intensive Baby Care Unit. The team at the vehicle salvage yard hope the sales will raise £1,000.00 for the critical care unit which caters for sick and premature babies in the region. Each member of the busy scrap yard, which six years ago shot to fame in BBC1’s reality series The Scrappers, has had their ‘mug’ put on a mug for the worthy mission. Yard owner Terry Walker explained why he holds the unit so close to his heart: “My daughter Cathy Lee was born at 1lb, 9oz, doctors told
Read More ...
how do I go about scrapping a van, I want to sell my van, What can I do with my old van?

Where can I buy car parts for cheap?

It’s finally starting to feel like we are getting back to normal since the coronavirus outbreak.

Like every business during the thick of it we had to make adjustments, limiting yard operations while also understanding people need to stay on the road.

And to keep people on the road, they’re going to need affordable replacement car parts.

We are a 24/7 online operation which enables you to go on to our website whenever you want and order the part you need which will usually be delivered the next day.

If you do fancy a trip out to our Breakers Yard in Bolton, we are operating social

Where Can I Find Export Car Parts?

METAL HEALTH
https://thescrappersltd.blogspot.com/2020/06/car-parts-for-export.html COP a load of this – the film below shows what happened afterwards to the copper wiring stripped from scrapped vehicles in our yard. Copper is highly ductile, meaning it can be stretched out as thin as possible yet remain strong. It’s used in electrical wiring, is malleable and resistant to corrosion.
There’s more copper found in better built vehicles that are heavily tech reliant. And that’s why it would be a terrible waste not to recycle all this copper. We posted an article about how we had miles and miles worth of copper wiring that we’ve taken from cars over the past ten years. Enough to wrap around the world almost four and a half time over in fact! Shortly after our article went live, we were contacted by a company called A&G Metal Solutions who have over 100 years in the scrap metal recycling industry.  They bought a tons’s worth of
Read More ...
buy engine online India, I need to scrap a car near me, where can I find export car parts